Do Hotels Charge For Stained Towels? The big brands don’t charge for stained towels. They take responsibility for fixing any towels that may have been stained by any of their guests. 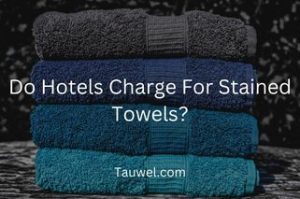 Oftentimes where the stains cannot be removed, they give out the towels as donations but it all depends on how severe the nature of the stain is, they may throw them away.

This is not usually the same with the smaller hotels, especially when they find it hard to remove the stains through their possible means.

Like I said above, the big hotels won’t charge you for a stained towel, especially the white ones but it might be a different scenario with the small hotels.

This is because the big hotels take care of the stained towels as soon as you ask for a new one or just after the time you check out of the hotel.

This same experience might reflect on your bills when dealing with a small hotel due to their limited resources to shoulder the fixing cost. This implies that you make backup budgets when checking in, into a small hotel, just in case you stain a towel.

To be aware of the consequences of staining a towel, make sure you always read the hotel policies as you check-in or ask any of the hotel attendants or staff. This is pivotal to regulating your activities around their towels.

Why do hotels use white towels?

You would agree with me that anything white is the easiest thing to get stained or even pick up sticking stains from any little encounter.

But hotels still choose to use this colour even when you must use it on your skin that often leaves dead skin particles to be cleaned.

The hotels know very well that guests dry up their bodies with the towels they keep in their lodges. I mean that’s the sole reason right? Then why pick the white colour still? Here are a few reasons why. Here are some quality premium white towels you can purchase on Amazon – Utopia Towels.

Have you ever thought about how easily noticeable stains on whites can be? As soon as they get the stains you can see them visibly obvious on the towels or clothes.

Imagine that hotels were using black towels. You can use a black towel to cl3an up surfaces and just dust the obviousness away.

This will make the cleaners or washers relaxed during laundry sessions. They could just rinse the towels and feel it’s safe now cos it will actually come out clean to the eyes and you can’t blame them for not fixing an invisible problem.

The use of white towels by hotels is just a symbol of how well they value the health and hygiene of their guests. It only shows they have your interest at heart.

It also shows their professionalism and ability to maintain absolute cleanliness. So don’t feel like white towels are bill traps set by the hotels.

The reason why white towels can be easily cleaned is this, you can dump all your white towels into water mixed with bleach and you won’t have to be petrified about discolouration.

As a matter of fact, even if your white towel were stained by blood you can easily remove the stains trouble-free by simply using hydrogen peroxide with cold water. This is not something that a good number of people know of.

It is a rare case of sight to have any other colour except white for towels in a hotel. This is because most hotels prefer to explore the aesthetic look it creates. They don’t just use white for their towels but also use it for their beddings.

This is so because most hotels love to paint the inside of their rooms white too. The use of white towels and beddings gives a corresponding look to the room.

Hotels prefer to use white specifically because it gives the room a fresh and sparkling clean room. It also creates a feeling of luxury for the guests.

The best washing solution for easy removal of stains from clothing, especially whites is bleach but you know how this can negatively change the looks of other colours if used to wash them.

It rather accentuates their whiteness the better. This makes it a better choice for the hotels to use white towels and beddings only.

This is a very good reason that exists to ensure that the use of white towels is a cost-effective approach for hotels.

This is the fact that it can really help in saving the cost of water and detergent as a lot of white towels can be thrown into the same washing machine without the worry of how one colour may affect the other. They go in white and come out sparkling white.

This beats down the cost expenses for hotels in carrying out laundry on their towels. Towels don’t have to be separated and washed colour by colour using perhaps different detergents and a whole lot of clean water for every single washing.

So if you ever think that providing different colours of towels or dark-coloured towels by hotels to their guests would save them money on professional cleaning, maybe it’s about time you really had a rethink. This is because hotels can save themselves from many costs by simply sticking to the use of white towels.

What should you do when you stain a towel in a hotel?

A lot of thoughts on what to do will run through your mind when you get a towel stained. You’d agree with me that most thoughts will be negative.

Some of which would be to stash the towel under the bed or could even be to sneak it home just dispose of the evidence that you stained a towel.

However, there is nothing other than one thing to do when you stain a towel in a hotel. Just own up to it. Accept your deeds and sort out possible means to fix them.

Hotels are not ignorant of the fact that white towels tend to pick up stains easily. And the same white towels are what the majority of them still make available for use.

Why worry about staining a towel when it is no longer a surprise for hotels to see their towels stained. They are aware of all the possibilities.

You don’t have to feel ashamed about accepting that you stained a towel, everyone knows you didn’t stain the towel because you are a child. It’s just a simple mistake. So, whenever you notice a stain, quickly report the issue to the hotel management and place a need for a new one.

Always make sure you apologize to the housekeeping staff as that would show your good gesture and respect for them as they come to pick up the stained towels in exchange for a new one.

To minimize the effect, you can rinse the stained areas with cold water and detergent. Don’t try to bleach the towel, especially if it’s not white.

Always keep in mind that you’re not obligated to clean a stained towel. But ensure not to get them stained in the first place. There is no need to panic if it was an accident.

Is it only hotels that use white towels?

It is not only hotels that use white towels. You can find white towels in vocational rentals too. But it is often an embarrassing thing to stain a towel as a guest staying there.

That is so because, staying in a vacation rental is literally staying in someone’s home, which makes it a personal experience rather than staying in a hotel.

However, most vacation rentals are aware that towels and beddings, especially whites are likely to get stained easily. So they do not charge their guests for towel stains. They simply just prepare for it and fix it when necessary.

Things can be completely different if you stain a towel from an activity that breaks the rules of the house. A common and easily breakable rule is ‘not having parties in the room or house’

After house parties, a lot of guests use towels to clean up drinks that may have been spilled in the event like red wine, which can be very difficult to clean off. If that is the case, the owners of the vocational rentals may charge you for the stains to be removed or for the towels to be replaced.

Do hotels charge for missing towels?

The most commonly stolen items from hotels are towels and robes. This is because they can be easily sneaked into their luggage while checking out.

So, once a missing towel is discovered, what the hotel will do is automatically charge you and debit the credit card you may have registered with the hotel when you checked in. They will bill you the cost of replacing whatever is found missing.

What do hotels do with stained towels?

Do you get charged for bleeding on hotel sheets?

It is true that some hotels charge for stained sheets most of the time but when it comes to blood stains, considerations are put in place.

If the blood stains problem happens for a second time and the hotels find out it was rather deliberate than an accident, they will charge you for the misuse.

Do hotels charge for hair dye on their towels?

Hotels don’t really care about such minor stains as it can be easily washed off the towels. But if you stain their towels with a lot of dye, they may charge you for it. So, it is better to avoid the scenario.

Can you get makeup on hotel towels?

Products like face medications, creams, makeup, foundation and tanning products could stain or even bleach towels. There are rolled down towels(which are stain-resistant) in a basket for the cleaning off of those kinds of products.

These towels are usually kept in each bathroom. So make sure you use them to remove those products from your face or skin and avoid using hand or bath towels with skincare products.

How do hotels keep towels white?

They first of all, wash the towels with detergents and then again, wash them with fabric softener. To better bring out the whiteness of the towel, they will use bleach (such as Clorox performance bleach) in the final washing process. And that sustains the sparklingness of the towels.

Towels are some of the most misused items there are in the hotels. If guests don’t steal them, they check out leaving them stained badly sometimes. Stains of different kinds could affect the looks of towels.

However, there are also a lot of different methods to use in getting rid of the stains. You wouldn’t blame the hotels if they make rules around towels that may seem harsh.

It is a very nice thing to avoid staining the provided towels, especially when they are white ones, whether you are staying in a hotel or a vacation rental.

This is because the gesture only leaves a good impression to the management or owner of the hotel or vacation rental, respectively. Try to do all that you can to keep and treat the towels they give you like they were your own.

This will do a great deal in preventing the feeling of guilt and possibly extra charges on your bills when checking out or even after the embarrassing moment.