When we get questions like this, we begin to imagine the correlation between a towel and urine. But that is not so hard to figure out, is it? 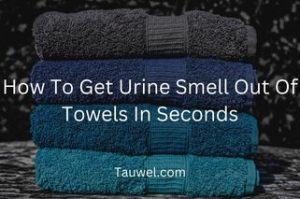 Different people make use of different tools for handling their cleaning obligations. Different items For cleaning up spills, a lot would find a towel very useful. This is because, when it comes to a big spill, only a cloth towel absorbs a lot more and cleans a lot better than most of its counterparts.

So yeah, finding the correlation between a towel and urine is pretty much easy as one of the towel’s job is to clean up any form of spills, urine inclusive.

A towel can be used for diverse reasons and that includes some downright dirty and disgusting jobs like cleaning up urine and other yucky mucky substances you can think of.

Now, it’s a given that towels are effective in handling a myriad of tasks but, as a rule, the towels must be kept squeaky clean after every use as you do not want the germs it has successfully been able to wipe off to get transmitted to other items in the environment.

How then do we wash these urine-soaked towels? Would it also be possible to get rid of the urine smell as well? Read on to find answers to these questions and more.

Pro Steps To Get Urine Smell Out Of Towels

Below is a step by step guide to not just washing urine off towels, but eliminating the nauseating smell as well.

Why does urine smell so bad?

It is totally natural! The smell of urine is naturally far from being a pleasant one. Due to the chemicals like ammonia for instance, present in it. However, there are a few cases that might warrant your urine to smell excessively bad. They include:

*Dehydration: Your urine is bound to look darker and smell way worse when you are dehydrated. Drinking sufficient amount of water and other fluids helps in combating the power of the bacteria responsible for the terrible smell and aids in overall metabolism.

This basically explains why your first pee of the day looks so dark and smells so bad. Later on, you would find the colour of your urine lightening up and smelling better when you must have had a few glasses of water. Bottom line is to drink lots of water for a clear and less smelly urine.

Diabetic people especially those poorly managing their condition experience close to a sweet-smelling odor emanating from their urine. This is as a result of the blood sugar levels shooting higher than normal.

This is so because, the kidney stones makes it impossible for urine to pass through the proper channel. Instead, it diverts its passage to the urethra where it gets enough dose of ammonia, causing it to smell badly. Another issue with kidney stones is that it puts you at great risk of contracting urinary tract infections.

Your urine is likely to smell so bad when you are diagnosed with a UTI. Only when you take medications to cure the infection would the smell of your urine improve significantly.

All in all, you just might be in need of prompt medical attention if you notice the smell of your urine smells way worse than normal.

What can I do about the smell of urine?

If you have cleaned the affected area of the urine spill yet, perceive even though very faintly, the offensive odor of urine, then you can go the extra mile in executing the following strategy:

Are paper towels better than cloth towels for cleaning up urine?

When it comes to choosing between a paper or a cloth towel for the purpose of cleaning up urine or other liquid substances, the cloth towel is your go-to fabric.

The reasons are very obvious. The superb absorbing quality of a cloth towel is second only to the microfiber towels. Apart from that, no other fabric comes close to its speed and prowess.

The cotton towel soaks in fluids upon first contact. Due to the nature of its make-up; its structure, composition and speed of absorption it is the most preferred between  the two.

To further buttress just how far ahead the cotton towel is amongst other materials, it is only right to add that, the towel can accommodate times two of its weight in water! In fact, the Thicke the towel, the better it absorbs.

Placing the cotton towel side by side with a paper towel, the most suitable would definitely be the cloth towel. The cotton cloth can suffice in the cleaning up of urine and other spills but, you might need to put in twice the effort and spend double the time on the task with a paper towel because of its sub-par absorbing skill.

Do towels used in the cleaning of urine pose a health risk?

This is largely dependent on the sanitary control measures you personally put in place. How fast do you wash your towels after a urine clean-up?

Do you leave them for hours or even days soaked with urine and stinking so bad? How well do you wash them? Are you concerned about expunging the stench too or you’re just focused on washing off the urine?

The answers to these questions would determine to a large extent, if you are at risk health wise courtesy of your cleaning towel or not. The rules are simple and very straightforward:

It is highly important that these tips are adhered to in order to reduce or rule out completely the risk of contamination and subsequent spread of germs and diseases.

Failure to comply with the rules would see the growth of bacteria and fungi on the towels that can easily be transmitted from person to person upon direct contact.

Tired of the smell of urine? Here’s what you should do?

Maintaining a clean looking and fresh smelling environment is a lot of hard work. One that must be done if you intend to operate under a high standard of health and safety.

For this to happen, you have to be on top every form of dirt, leakage or spillage. Attending to these issues as they happen would put you standing gallantly on top of disease and odor control.

We know it’s not as easy as it seems especially if you have a couple of kids and keep pets in the house that would most likely, spill one thing or another frequently, pass out urine uncontrollably, cause breakages and other damages requiring urgent cleaning, it’s quite the task but absolutely worth doing.

Find below ways in which you can achieve a clean home as well as effective odor control methods you can adopt.

The dangers of leaving urine uncleaned

Do you know that urine left unattended to has the potential of being overly concentrated? when this happens, the odour becomes nearly corrosive and evades the whole environment mercilessly.

This is as a result of an acid called “uric acid” and it is present in the urine of every living thing, both humans and animals.

Cleaning the area with soap and water will aid in neutralizing the bacteria responsible for the odour and help in depleting the power of the acid.

How To Get Urine Smell Out Of Towels – Conclusion

Urine naturally has an offensive odour. This is largely attributed to the presence of ammonia in it and it’s exactly why medical experts advocate for steady hydration for, the more fluids you take in, the less offensive the odour becomes.

The cloth towel on the other hand, is very effective in the clean up of urine. Other cleaning tools can be used like paper towels and even newspapers. But no one does the job as neatly and quickly as the cloth towel.

For places in which the spill of urine is likely to be a frequent occurrence like homes, hospital, old people’s home etc, it is advisable to get a couple of cleaning towels to help you in a fast clean up.

However, you must take the necessary steps and apply the stated tips in ensuring that the towels are subsequently washed clean and the stench totally expunged from them.